It’s hard to be enthused about the start of a new era when it still feels like you’re at the end of the old one. Perhaps that explains the boos that greeted the final whistle following Graham Potter’s first match as Chelsea head coach, rippling more with frustration than anger and swiftly displaced by applause for the effort of a group of players who reflected their mood.

A couple of hours earlier, there had been considerable anticipation before Potter’s first team selection, but it quickly became clear he favoured evolution over revolution.

Chelsea’s fluid 3-5-2 system against Red Bull Salzburg built on Thomas Tuchel’s tactical infrastructure with minor tweaks rather than major departures: Raheem Sterling starting as a nominal left wing-back but spending most of his time as a true winger; Mason Mount forming a midfield three with Jorginhoand Mateo Kovacic rather than operating further forward; Kai Havertz leading the line and the press in tandem with Pierre-Emerick Aubameyang.

The sense of an ending rather than a beginning pervaded the whole evening, from the pre-match tributes marking the death of Queen Elizabeth II and the fan-orchestrated 21st-minute applause and chanting for Tuchel to the performance itself, a valiant but ultimately vain attempt to escape the persistent issues that helped hasten the departure of Stamford Bridge’s popular Champions League-winning mastermind.

Potter’s main instruction appeared to be simply to move the ball more quickly, with fewer touches and greater ambition. Salzburg’s relentless press ensured nothing less would do and the tempo for much of the first half was frantic, but that in itself was quietly encouraging; Leeds United and Southampton both successfully smothered Chelsea with similar intensity, but here they rose to the challenge.

Sterling menaced on the left, Mount and Reece James probed from the right and only impressive last-ditch defending from the visitors prevented more shots on target.

Dressed sharp for his Champions League debut in a black suit and skinny tie as if to attend an indie funeral, Potter stood in contrast to Salzburg’s answer to Julian Nagelsmann, the slick-haired, suit and sockless trainers-wearing Matthias Jaissle.

Potter also presented a clearer break from Tuchel in demeanour as well as dress code: observing calmly from his technical area, breaking out of his silent stance to applaud and offer encouragement to his players when passes and touches went awry, rather than turning back to vent at his assistants or harangue the fourth official.

Chelsea’s starters performed with more expression and confidence — up to a point. That point tended to be the Salzburg penalty area, where too many advantageous situations fizzled out without a shot being taken. Sterling’s opener, a wonderful curling shot into the far corner, was a jarring moment of ruthlessness. Aubameyang looked more out of scoring rhythm here than on his debut against Dinamo Zagreb, while netting a late winner against West Hamearlier this month does not appear to have been the breakthrough for Havertz that it might have been. 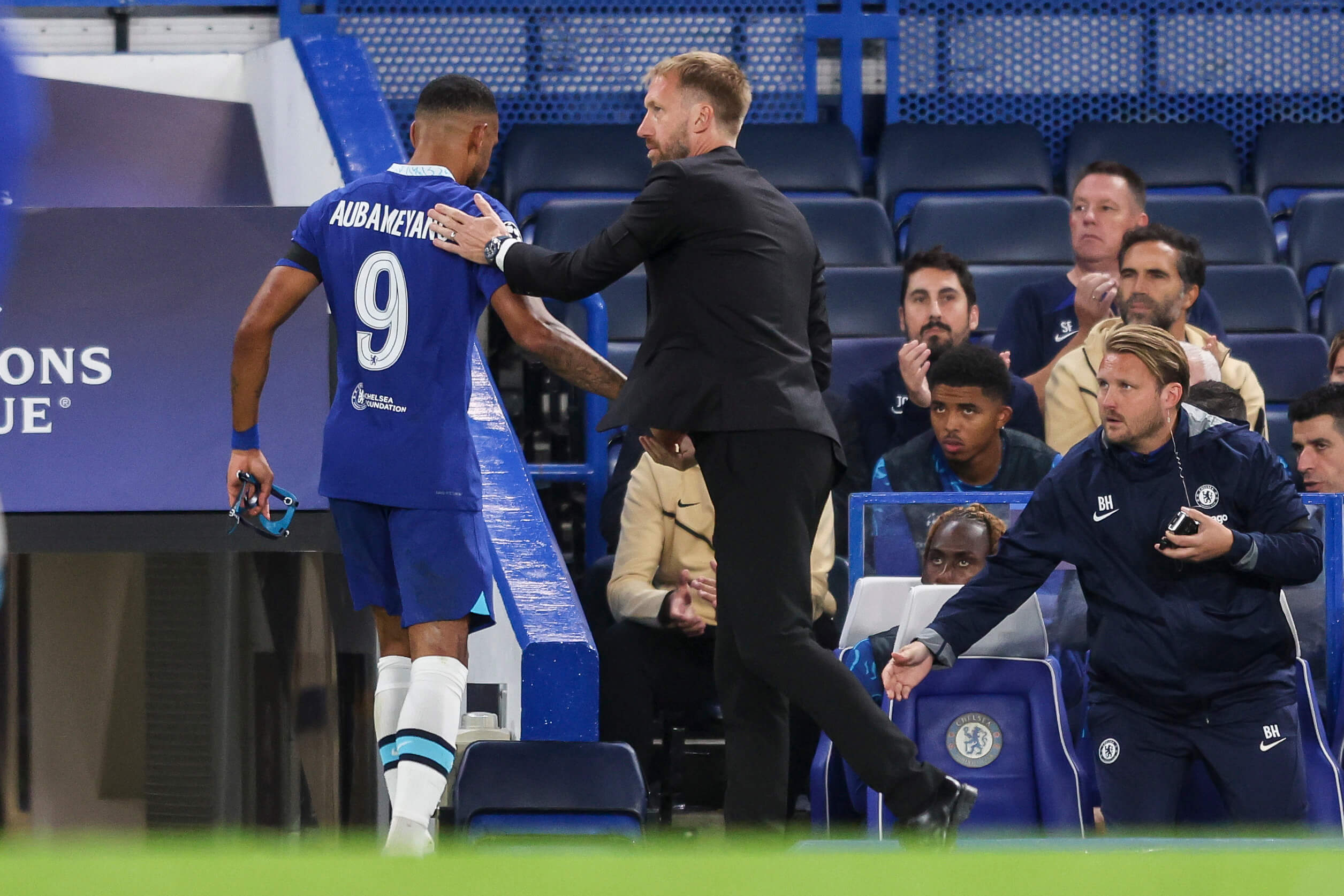 Armando Broja carried greater threat than both combined in his 24 minutes off the bench and surely needs to be under consideration to start sooner rather than later. The same cannot be said for Hakim Ziyech or Christian Pulisic, both introduced to varying degrees of booing in the second half. Confidence is low in each case, but sympathy at Stamford Bridge is lower for two attackers now worryingly far removed from their best football in Chelsea blue.

A late flurry of pressure created the impression that Salzburg had survived a sustained barrage at Stamford Bridge, but the numbers indicated a continuation of Chelsea’s attacking struggles under Tuchel: an expected goals (xG) rating of 1.15 — albeit from 17 shots to the visitors’ four — is only marginally better than was mustered against Southampton and West Ham, and still far below where it should be.

At the other end, Chelsea’s expected goals against (xGA) rating of 0.42 is the best they have produced in any match this season. Potter’s midfielders battled tirelessly to recover possession together with Marc Cucurella and Cesar Azpilicueta on either side of the back three and, between them, Thiago Silvawas spectacular for most of the evening.

The Brazilian only missed one consequential tackle on substitute Junior Adamu, after Jorginho had missed another in front of him, allowing Salzburg to exploit the space Cucurella had largely marshalled well without needing much reinforcement from Sterling. As seems to be the way with Chelsea right now, the worst-case scenario came to pass: a pinpoint cross from Adamu and a low shot from Noah Okafor skimmed through Azpilicueta’s legs and beyond the unconvincing dive of Kepa Arrizabalaga.

Chelsea now find themselves in a position few would have believed possible when the Champions League draw was made last month: bottom of group E with one point from two matches against Dinamo and Salzburg, and AC Milanhome and away still to come. Any margin for further error is well and truly gone if Potter wants his first Champions League adventure to continue beyond the group stage.

But the situation remains eminently recoverable. September’s unexpected fixture disruption gives Potter precious time to mesh with his new squad in training at Cobham, and he made clear that his choice of system against Salzburg was driven more by the nature of the opponent than tactical ideology. The formation will shift and so too will the personnel within it — and at some stage N’Golo Kante will return and be N’Golo Kante again.

As for the broader gloom around Stamford Bridge at this time of unsettling change, it’s worth remembering that Tuchel also started with an uninspiring draw at home.