Summon the famous former players, print out and fold up the pieces of card, arrange the opaque plastic balls into the correct seeding pots: the Champions League group-stage draw is upon us today. An evening that treads the line between pomposity and kitsch, replete with close-up shots of grinning club officials, is coming to Istanbul. The countdown to the 2023 final — three years after the Ataturk Stadium was meant to host the final — has begun.

So why does it feel, as we prepare to surrender up so many of our Tuesday and Wednesday nights for the next season, as if we are coming in at the end of the party? That the prestige and glamour of this tournament is wearing off, that it has grown too big, too stale, and worst of all for a knockout football competition, too predictable.

The Champions League has dominated European football for a generation but this year’s version feels less dominant and more threatened than it ever has done before. Plenty of claims will be made on its behalf this evening, and throughout the season, but not with the same old weight.

Any claim that the Champions League is the most important show in town this year cannot survive the briefest glance at the football calendar. This is the season when the normal pattern of the season has been broken in two. The rich end of club football, which has had its own way on every major decision for the past generation, has finally found itself on the back foot, forced reluctantly to work around this year’s World Cup.

Like someone desperately trying to cram all of their clothes into one item of hand luggage, the club game is scrambling to squeeze all of its normal matches into this short autumn. Hence this ludicrous situation where the draw is being conducted today, 12 days before the first group game. All six group games will be played within nine weeks, which includes one two-week international break after the first two games.

So what should in theory be an exhibition of the best football in Europe instead will be an exercise in fixture fulfilment. It may even look like COVID-era football, when it felt as if games were being churned out every day simply to pack out the TV schedule, regardless of whether it was what the players’ bodies needed.

And looming over all of this will be the shadow of the World Cup, kicking off at the Al Bayt Stadium, on the north east tip of the Qatar peninsula on November 20. It may not be that obvious now, in the opening glare of the Premier League season, but after the next international break it will be more present every day. Not merely in the minds of the fans and media either, but crucially in the hearts of the players too.

Ask the few hundred best footballers in the world what their main priority is for the next 12 months. Surely the answer would be success in the World Cup, rather than anything they might win with their clubs. Even a World Cup as morally tainted as this one, a World Cup that should never have been awarded to Qatar, will for the players still retain a sheen of prestige, mystique and even romance. This is their chance to play their way into history.

What we do not know at this point is what the second half of this season will look like, when players physically and emotionally wiped by the World Cup are forced straight back into the hamster wheel of the club game. Maybe we will all quickly forget about Qatar and fit straight back into club narratives. By the time the Champions League knockout rounds start on February 14, the World Cup final will already be more than eight weeks behind us, time enough for it to be mentally filed away as part of football history. Or maybe it will weigh on the second half of the season, not so much in the minds of fans but in the legs of the players.

Even the Champions League knockout rounds have lost some of their lustre. The entertainment is still very good. Just looking at last season, it is impossible to argue against the drama of Real Madrid’s wins over Paris Saint-Germain, Chelsea and Manchester City, or the tension of City’s win over Atletico Madrid.

But plot twists are not the same thing as unpredictability. The stream of high-end floodlit football content will always keep improving. But take a step back and the overall outcomes are as predictable as ever. In the past 18 years, only two winners have come from outside England, Spain and Germany, (AC Milanin 2007 and Inter Milan in 2010), with only four defeated finalists from outside the big three leagues, (Juventus twice, Milan and PSG once). Real Madrid have made 10 semi-finals in the past 12 years. Bayern made the semis seven times between 2012 and 2020. Liverpool have been in three of the past five finals. 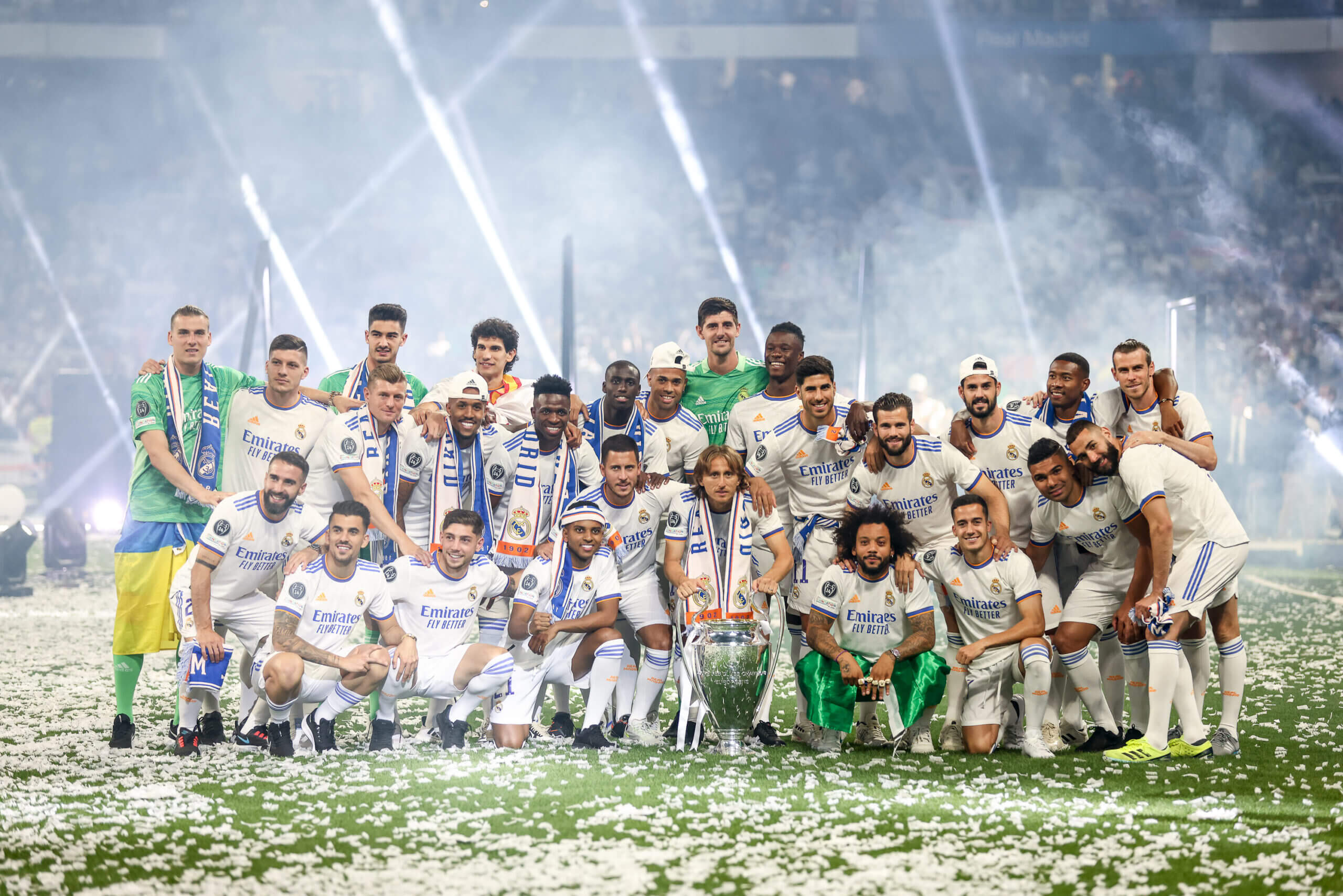 The Champions League knockout stages increasingly resemble the last few James Bond films: glossy, expensively put together, slightly over-sold and full of dramatic cliff-hangers. But the viewer still broadly knows who is going to win and who is going to lose. The plot will surprise you, but will always stay within a narrow funnel of established outcomes. It only feels dramatic in the moment itself.

So even now in late August, it is easy enough to guess what the make-up of the quarter-final draw will be on March 17 next year. Real Madrid. Bayern Munich. PSG. Barcelona if the new signings gel. Manchester City. Liverpool. And possibly at least one other English club too.

This will be the penultimate version of the competition before the new format starts, which will allow two more places to Europe’s best leagues and an expanded group stage, with teams playing eight games rather than six. It is another step in the direction of big-league dominance, games for the sake of games and, ultimately, the same big sides being there at the end.

The idea that Europe’s elite competition still stands for variety and novelty and unpredictability — and above all for a level playing field — feels as remote now as goalkeepers picking up backpasses.

Yes, the winner tends to change year on year (although it is usually Real Madrid), but even that feels like it matters less than it used to. It could be argued the fact that neither Manchester City nor PSG have won the Champions League yet counts in its favour, that it shows how the biggest prize is not as easily buyable as domestic leagues. (City have won the Premier League four years out of the past five, PSG have won Ligue 1 eight years from the past 10). But this big-eared trophy still belongs to Europe’s historic clubs.

But a look at this summer’s transfer market suggests even that barely matters anymore. This was a rare summer when the two best young forwards in the world, Kylian Mbappe and Erling Haaland, were both on the market. Each man had the chance to go to one of Europe’s most prestigious clubs, one with plenty of European cups in their cabinet. But each of them decided against it: Mbappe turned down Real Madrid to sign a huge new deal at PSG, and to keep playing alongside Neymar and Lionel Messi. Haaland chose to leave Borussia Dortmund for Manchester City. Winning the Champions League always used to be the ultimate measure of prestige, but maybe the next generation of players feels differently.

The biggest threat of all to the Champions League comes from inside the house. This World Cup is a disruption and a reminder that there is something even bigger and more prestigious than UEFA’s flagship competition. But it is also the only time this will ever happen. The next few seasons of the Champions League will roll on unencumbered by the prospect of USA, Canada, and Mexico 2026 waiting down the road.

There is no greater threat to the Champions League than the case brought to the European Court of Justice by Real Madrid, Barcelona and Juventus (21 European Cups between them), challenging UEFA’s right to punish them for trying to set up a competitor to the Champions League. If the three rebel clubs win the case (the next update is due in December), they could eventually choose to push again to set up their own European competition, separate from UEFA, and an existential threat to it.

If that happens then inevitably other clubs, currently within the Champions League orbit, will be tempted across to the rebel competition. And in an instant, claims that the Champions League represents the pinnacle of club football will evaporate. Because how could that be argued when some of the competition’s most successful teams are now playing somewhere else? That would clearly mark the end of the era of Champions League dominance, the water we have all been swimming in for the past 30 years. But that may already be the case, whether we know it or not.

One thought on “Is this the beginning of the end for the Champions League’s era of dominance?”