Erik ten Hag dropped Cristiano Ronaldo to the bench for Manchester United’s victory over Liverpool on Monday. The 2-1 win vindicated the new manager’s decision — but what does that mean for the Portuguese forward’s future at the club?

Laurie Whitwell, Carl Anka and Andy Mitten joined Ian Irving for a Talk Of The Devils video podcast special to discuss the issue…

Laurie Whitwell: It wasn’t a great 90 minutes for Ronaldo against Liverpool but it was a big 90 minutes for Erik ten Hag because the calls he made — notably putting Ronaldo on the bench — paid off. At one point I didn’t think he would come on at all, but it was only four minutes at the end (that he played).

Anthony Martial, who has been out injured, came on before Ronaldo. Clearly, that’s somebody whom Ten Hag thinks he can work with long-term. We saw it on the pre-season tour — the way he (Martial) linked up with Jadon Sancho, Marcus Rashford and Bruno Fernandes — and Ten Hag has spoken about the fact he used Christian Eriksen as a false nine on the opening day against Brighton because Martial was injured.

The Liverpool match will give Ronaldo a lot to ponder. We saw him on the bench and some of the facial expressions were stern.

It was quite notable that he came over to the Sky Sports presenters before the game and Gary Neville got a hug but Jamie Carragher, who has been critical of him, didn’t. Roy Keane got a warm, affectionate hug — I think they do have a decent relationship and Keane has defended him.

I thought Ronaldo was making a point: ‘I’m here, I’m present, here are guys I’ve won trophies with before… and I don’t like Jamie Carragher very much’.

Carl Anka: It’s difficult because I don’t think Ten Hag will want to play that style every single week in the Premier League. United were brilliant against Liverpool, playing some of the best football I’ve seen for a good chunk of time and exploiting the space in behind. But you probably won’t see that next week against Southampton — you won’t only get 30 per cent possession (which United had against Liverpool), and that’s where Ronaldo becomes a more conceivable option up front.

The thing about Ronaldo — and this is what Ten Hag seems to stress — is he believes he is physically able to play his style of football. And everybody knows Ronaldo is fit enough, strong enough and quick enough to play Ten Hag’s style of football. It’s whether or not he wants to buy in.

Is he emotionally pliable enough to play Ten Hag’s style of football? Because it will involve him doing a lot of running off the ball and playing a style he hasn’t really played in a long time. It feels like Ronaldo is reluctant to start doing something else, but he’ll have to if he wants to play under Ten Hag.

Andy Mitten: I think Cristiano will, at some point, have to come to terms with his own diminishing talent. He’s been a success right up until now for Manchester United. But at some point, he’s not going to be able to play every week in a league as tough as the Premier League.

Ole Gunnar Solskjaer dropped him, (caretaker manager) Michael Carrick dropped him, Ralf Rangnick wanted to drop him and Ten Hag has dropped him. Ten Hag is showing he’s the most important person at the club — which a manager should be — and he’s sending out a very clear message; one that has been vindicated by the performance and the result against Liverpool.

If Cristiano stays, I still think he’s got lots to offer. He might not be playing 60 games a season or realising his dream of playing Champions League football but a Cristiano who accepts that it’s not just about him could still be massively beneficial to Manchester United.

But I’m still not 100 per cent that he will stay. There’s been a lack of suitors so far who can offer him what he wants. Either way, his situation needs to be resolved.

Whitwell: I think some players do struggle playing with him. You can look at what others have done in previous teams alongside Ronaldo — Paulo Dybala at Juventus or Karim Benzema at Real Madrid. It did feel telling that you had this explosion of energy straight away with Ronaldo on the bench (on Monday).

Also, Ten Hag had the players in on the Sunday after the Brentford defeat on their day off to run 13 kilometres each — the distance between them and Brentford (in terms of running stats in that match)  — and that (the Liverpool performance) was the reaction the manager got. You could lose some players with that authoritative methodology but you saw the reaction to it against Liverpool.

Then you’ve got someone like Ronaldo who, according to our information, is resistant to that, thinking, “Why should I need to do that?”, when his numbers in terms of goal-scoring have been brilliant — he was player of the season last year from the fans’ point of view, don’t forget.

We saw it on tour when Ten Hag thought he was getting something together with Martial, Rashford, Sancho and Fernandes — and then Martial got injured. But now he (Martial) is back, you feel that’s his front four, really. If Ronaldo can get on-board with that… that’s the big if. 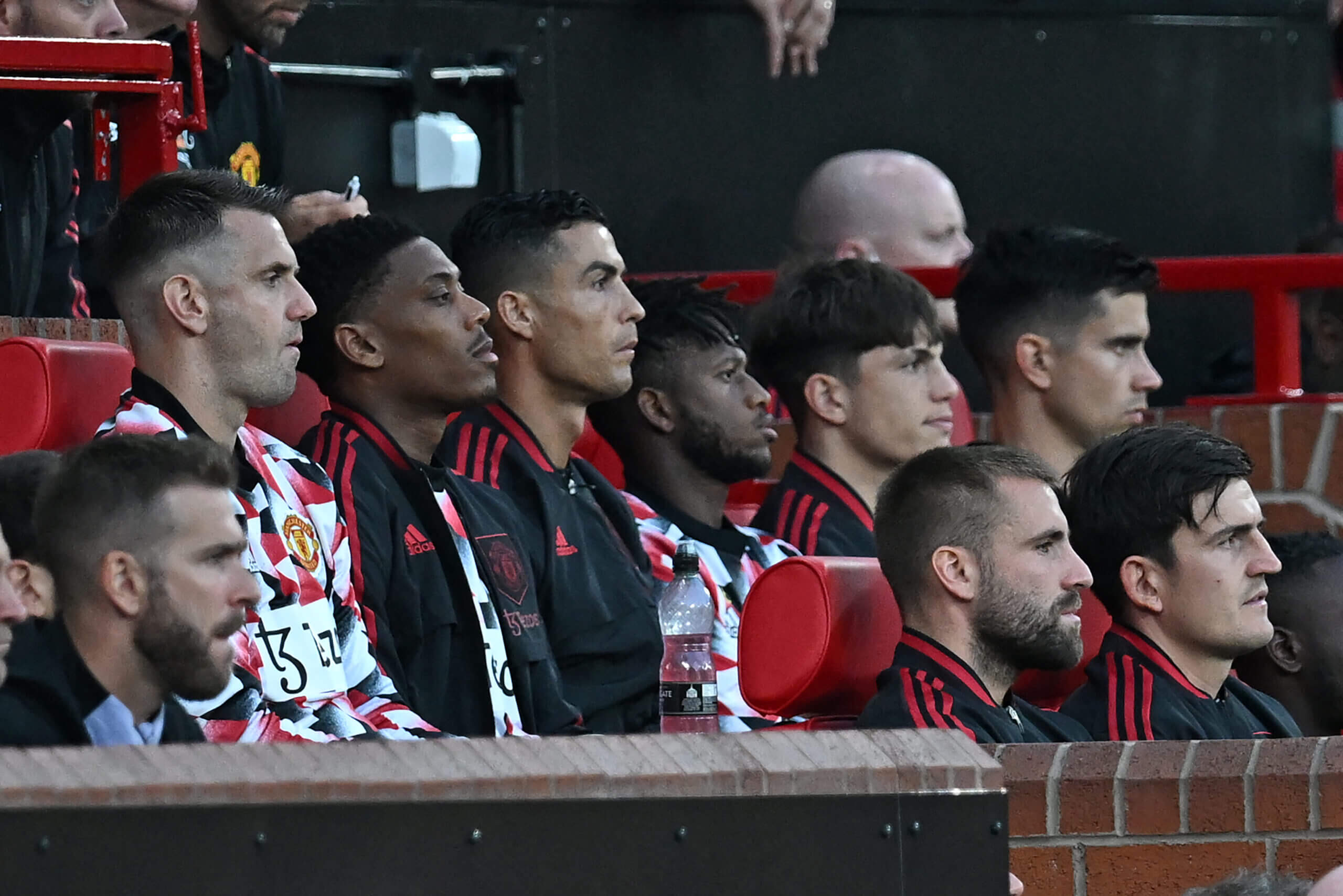 Ronaldo spent most of Monday’s win over Liverpool on the bench before coming on after 86 minutes (Photo: Paul Ellis/AFP via Getty Images)

Mitten: Ten Hag’s played it well. He saw the impact on this happy squad when he brought them back from the tour and Ronaldo joined it — the mood didn’t improve, it got worse. If that negative can be turned into a positive, I think he can still offer United something great, but there’s got to be some compromise from his side. Ten Hag has got to think of the collective, not just about one player.

Anka: There were times in 2019-20 when they gave the ball to Fernandes and he took on that creative drive and it worked. When Ronaldo comes in, the system eventually becomes “Give it to Ronaldo” because if you don’t, you’re likely to have him in your ear afterwards, saying, “Why didn’t you give it to me?”

That is difficult when Ronaldo goes wandering — his movement doesn’t work necessarily in relation to the team but it works in relation to himself. Ronaldo has this thing where he’ll be in and around the box and he’ll hop back to give himself space because that’s how he likes to shoot.

But going from giving the ball to Fernandes when you’re stuck to giving it to Ronaldo or, if they’re both playing, not knowing who to give it to… Ten Hag’s got to coach that properly. You’ve essentially got to tell Ronaldo to stop wandering, which might be slightly insulting if you’re Cristiano Ronaldo.

Mitten: It’s a hard sell and there’s got to be compromise on all sides. Would Erik have signed Cristiano if he was the United manager a year ago? Not a chance.

I don’t think Manchester United would have re-signed Cristiano but for a chain of events at the end of the last transfer window when he was offered to Ed Woodward, who worked up the numbers, (then) sold the numbers to Joel Glazer commercially, who said to Solskjaer: “Would you like Cristiano Ronaldo?” Managers tend to like more players — especially very, very good ones.

You want to believe he’s the man who is going to make the team great again but his future is complicated. There are people who think Manchester United will be better off without Cristiano Ronaldo.

I’m torn on it. I think he’ll stay. I think he has something to offer — he’s the greatest player I’ve ever seen play for United in terms of his talent levels — but I think we’re also entitled to be constructively critical of his development and his place in the team under Ten Hag.

Anka: Can you imagine Ronaldo playing in the Europa League group stage? United are going to play three games away from home in that competition. Let’s say it’s Astana again. (United faced the Kazakhstan club in the competition’s 2019-20 group stage). Can you imagine him playing in that game? Can Ten Hag convince him to buy in? He’s never played in the Europa League (compared to 183 Champions League appearances).

I just think there are a lack of suitors. He is so expensive in terms of wages, he’s a challenge from a tactical point of view and he doesn’t press. (He will also turn 38 next February.) Is he less appealing now than he was a year ago? Yes. Thierry Henry has said this: he will be your medicine and your poison. I think that’s why other clubs in Europe have said they don’t need that right now.

My understanding was it was specifically about the Champions League goals record — Lionel Messi’s a couple ahead of him and a few years younger at 35. (Messi’s Paris Saint-Germain will be in UEFA’s blue-riband club competition this season.)

But where does he go? Chelsea were in for him, Atletico Madrid too (a club where his agent Jorge Mendes is very influential). Sporting Lisbon would be a romantic return, but the coaches are resistant to it. And the money is a factor as well.