Casemiro will be introduced to Manchester United fans in the same way as the last player who swapped the Bernabeu for Old Trafford — in front of a packed stadium ahead of a match against a fierce rival.

A year since Raphael Varane was paraded on the pitch before a visit by Leeds United, the latest signing from Real Madrid will repeat the walk and waves ahead of the kick-off with Liverpool.

United went on to beat Leeds 5-1 after Varane’s arrival had given the crowd a jolt of electricity and officials will hope Casemiro can provide a shot of serotonin amid the dark mood engulfing the club. Another protest march against the Glazer family’s ownership is set to take place in the build-up to the match.

Casemiro is scheduled to say farewell to Real Madrid supporters in Spain on Monday morning and then fly to England to say hello to United fans in Manchester in the evening, a whirlwind 24 hours for him that replicates the speed with which this deal was done.

United are not known for efficiency but it was only last Tuesday, when a delegation flew to Madrid to negotiate face to face, that the cat was let out the bag on Casemiro. You might conclude the 4-0 defeat by Brentford was the shock to focus minds.

Whatever the urgency provoked by slipping to the bottom of the Premier League after two games, there were still robust deliberations at the top of United about the expense required to convince Casemiro to leave the Champions League holders for a team not even in this season’s competition. United say similar consideration is given to all major signings, but it would be understandable if there was a particular pause before signing off on this deal.

Casemiro goes into the same ballpark for salary as David de Gea, who is on £375,000 per week, and is on more than Bruno Fernandes, Jadon Sancho, and Marcus Rashford. He will still be a top earner at 34 by the time his contract expires — there is an option for an extra year too — and all told the cost to United by 2026, including a £70million ($82.8m) transfer fee, should top £140m. The caveat is an annual wage cut in the event the club does not have Champions League football.

Those numbers tell you this is a transfer motivated by immediacy. Erik ten Hag needs a quality upgrade to slot straight into his midfield to inject momentum into his first campaign, and United’s recruitment staff might think they can hardly do better than bringing in a player who bossed May’s Champions League final to gain his fifth winners’ medal in the competition. That pedigree is why Casemiro’s entrance through the tunnel at Old Trafford will be greeted rapturously.

But there are reasons to temper the excitement.

To begin, Casemiro is a different profile of midfielder to Frenkie de Jong, the No 1 target for Ten Hag all summer. De Jong picks the ball up from his defenders and breaks lines by dribbling, Casemiro typically wins back possession and passes to others to create. That is not to say Casemiro cannot work at United, perhaps with Bruno Fernandes and Christian Eriksen in the roles occupied at Madrid by Toni Kroos and Luka Modric, but it means Ten Hag’s plans require alteration.

Allied to this is the adaptation and change in speed from La Liga to Premier League football. There will be little bedding in period before Casemiro’s debut, and he enters an immediately pressurised situation. He has experienced tough circumstances at Madrid, of course, and his character references appealed to United.

Theirs is a dressing room in need of leaders and he is held in the highest regard by Madrid president Florentino Perez. Then again, those doing the selling would inevitably paint the rosiest picture to get the highest price.

The question of why Casemiro has decided to join a club in such flux is pertinent too. He was very settled in Madrid and competing for the biggest honours regularly. United are adamant Casemiro is not doubling his salary by joining, but clearly there is a financial element to his choice. A new challenge is another valid aspect and on that front Varane helped in persuading Casemiro to move, speaking to his former and now current team-mate almost daily. 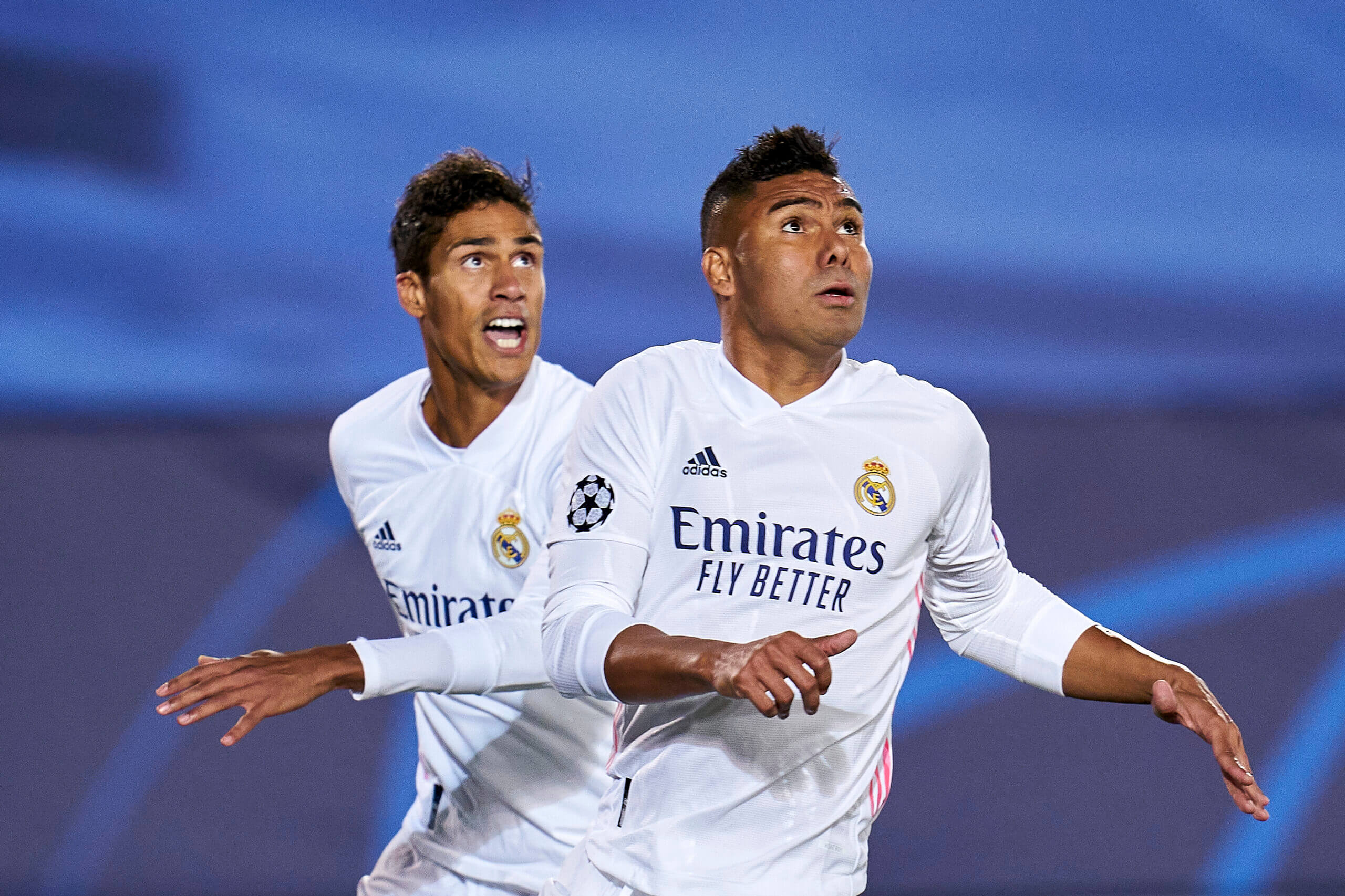 It would be easy to joke that Varane might argue the opposite given the turmoil of his debut season at United. He missed 16 games through injury and has started this campaign on the bench. Varane, though, has been training alongside Lisandro Martinez instead of Harry Maguire in team shape sessions, indicating Ten Hag is weighing up a change for the Liverpool game.

Like Varane, the signing of Casemiro also brings focus on the overall recruitment strategies at United and Madrid, a final cause to contemplate amid the flashbulbs and fanfare of this latest signing. The sense lingers that Real sell on their terms. They may be losing a legend but taking away the emotion, Casemiro’s replacements are already in Carlo Ancelotti’s squad. It is notable the Italian did not fight the transfer.

Madrid bought Eduardo Camavinga last summer, allowing a year of acclimatisation, and added Aurelien Tchouameni this window, for a combined cost of £120m. Aged 19 and 22 respectively, Real should have many years’ service from both of them ahead. Allowing Casemiro to leave helps fund that future, the kind of planning it is hard to detect at United.

Instead, United have spent a summer chasing De Jong, then switching briefly to Adrien Rabiot, another profile of midfielder entirely. Casemiro has been kept warm for several weeks in the background, with conversations with his agent and his club, but the transfer became a reality only when he was left on the bench until the 83rd minute at Almeria on August 14.

That delay means that, as with Varane, Casemiro arrives with United already having played matches in the Premier League. Ten Hag had wanted key signings in for pre-season so he could work on tactical ideas.

That hope, expressed by Ten Hag at his unveiling in May, feels a long time ago. Instead, yet again, United are ramping up activities as deadline approaches.

An €80m (£67.9m, $80.3m) bid for Antony was rejected by Ajax last Wednesday, although the player is pushing for a move. He did not travel for the Eredivisie match at Sparta Rotterdam on Sunday and United are weighing up an improved offer. 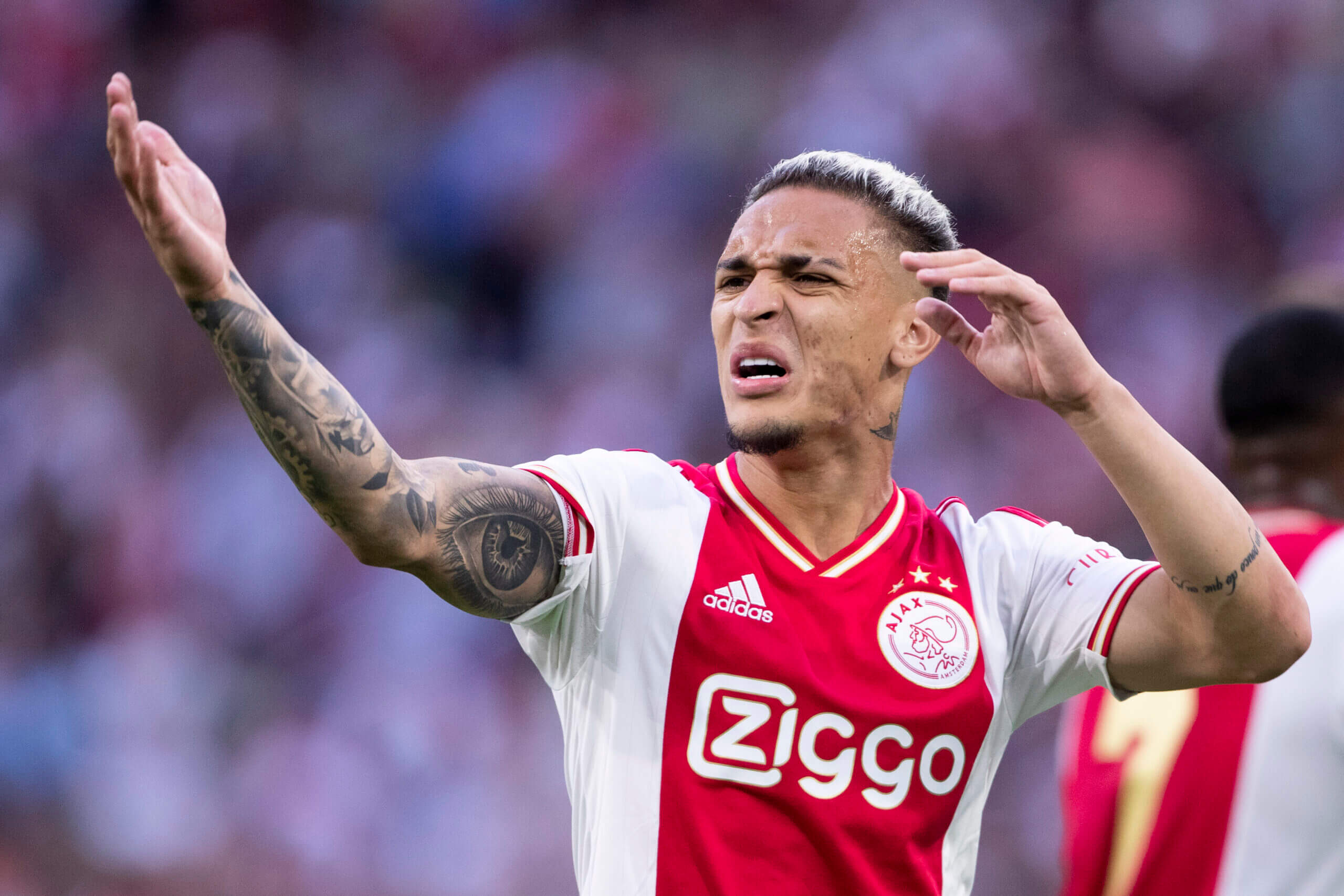 United are debating whether to increase their offer for Antony (Photo: Perry van de Leuvert/NESImages/DeFodi Images via Getty Images)

Ajax want €100m, a fee at odds with Antony’s statistics — he got 12 goals and 10 assists in 33 games last season — but commensurate with his importance to his team after a series of departures, the desire of Ten Hag and, importantly, the date in the window, which shuts on September 1. Sources claim Ajax would have accepted €80m when the market opened.

Cody Gakpo represents an alternative of lower cost, albeit a forward of different style. Antony is a left-footer who plays on the right, Gakpo does his best work off the left. PSV Eindhoven may demand €50m, but want to wait until after Wednesday’s Champions League play-off tie against Rangers to advance any prospective talks.