Anthony Martial’s injury absence and the strangeness around Cristiano Ronaldo left Erik ten Hag with a dilemma for the new season’s opening game.

Short on striking options and reluctant to disrupt the positive movement of wide forwards, the Manchester United manager opted to officially begin his reign at home to Brighton & Hove Albion on Sunday with Christian Eriksen as a false nine.

There have been many interpretations of the role, but a false nine is more complicated than rolling out a team without a recognised striker.

A false nine’s primary responsibility is to move into areas that drag opposition defenders out of position. The (hopefully) vacated space is then supposed to be exploited by their team-mates, who run in behind.

Constant off-the-ball movement and a high work rate are crucial to this tactic succeeding.

Against Brighton, it looked as if Ten Hag instructed fellow newcomer Eriksen to drop deep, vacating the space just in front of the opposition’s penalty area.

That zone was then to be filled by a collection of United’s midfielders, who would await quick balls over the top from Eriksen.

Take this instance, in the second minute of the game, when Eriksen receives a headed clearance from Diogo Dalot by the centre circle.

He hits a first-time pass over the top for several United players to pursue.

The only issue is Bruno Fernandes — the most advanced red shirt — cannot get to the ball and capitalise on the open space before the pass gets intercepted.

This occurred several times, with Brighton defenders being too quick and cutting out Eriksen’s ambitious passes, before then playing in the space those onrushing United midfielders had vacated to get forward.

Take this instance, in the fourth minute after Brighton clear their lines.

When Dalot comes onto the ball, Eriksen understands he is in a congested area of the pitch and attempts to run out wide, taking a Brighton defender with him.

In doing so, he makes it easier for any imminent United cross to reach a team-mate.

Look at Marcus Rashford in the image below, signalling for the ball just a second after Eriksen has started running…

…but Dalot chooses not to deliver a forward pass towards the England international, instead going back to Harry Maguire.

Throughout the first half, Eriksen found himself out of sync with a United team unsure of itself.

Instead of serving as a reference point for his new club’s attacking system, he was tasked with being the entire system by himself.

The accumulation of responsibilities took a toll.

In the 10th minute, Eriksen came onto the ball in an area where he is typically comfortable…

… only to become immediately pressed by Adam Lallana, who forces a heavy touch.

Eriksen recovered possession and passed the ball back to Maguire, but territory was lost.

Graham Potter’s three-box-three shape, with an emphasis on pressing United’s midfield pivot, left Scott McTominay and Fred unable to pass through central areas and get the ball to the Dane with the required quickness.

Ten Hag’s experiment with using Eriksen as a false nine eventually ended in the 53rd minute, when Ronaldo came on for Fred and the former Tottenham and Inter Milan playmaker was shifted into central midfield.

If we compare Eriksen’s touch map from the first half… 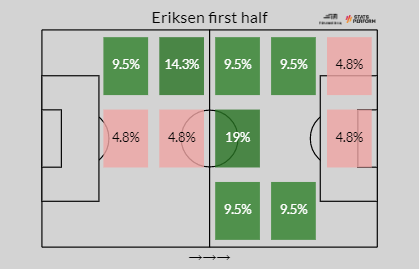 …with what he did in the second, we get a clear illustration of the areas in which he was trying to influence United’s play, and how effective he was at doing so. 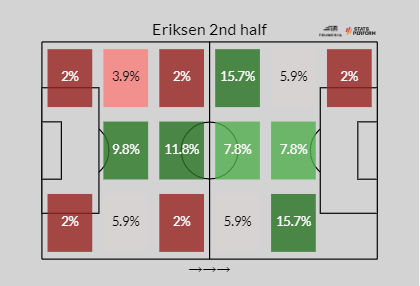 It was only in the second half, once he stopped operating as a false nine, that he began to come onto the ball in central areas in front of Brighton’s penalty box. 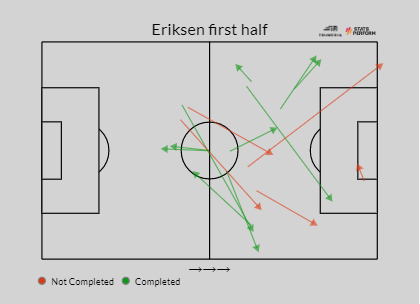 …and in the second. 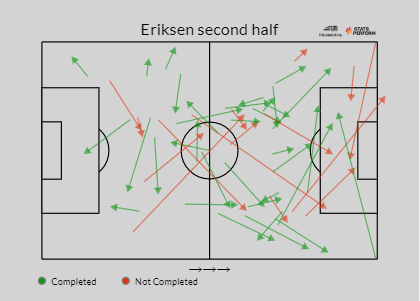 Eriksen was more successful making diagonal passes to the edge of Brighton’s 18-yard box when he wasn’t being used as a false nine and his team-mates were more comfortable as to where and when they should try to get forward.

“We made passing mistakes in building up, so that is nothing to do with either playing with a false nine or a typical No 9,” Ten Hag said following the 2-1 defeat.

“(Eriksen) can play in more positions because we didn’t have a typical No 9. I knew at Ajax, a long time ago, he played as a striker, dropping in, and I wanted to keep Jadon (Sancho) and Marcus on the wings; inside, they were really good in pre-season.

“Finally, Christian Eriksen is the best in midfield and that was also the idea that he drops, gets between the lines and brings the game.”

Eriksen did indeed play as a striker for Ajax a long time ago, featuring as a false nine several times in the autumn of the 2012-13 season.

In those games, his team won once (over Manchester City in the Champions League group stage at home), drew twice (in the reverse fixture with City and away to Feyenoord in the Eredivisie) and lost once (at home to Vitesse Arnhem, also in the Dutch league). Frank de Boer was Eriksen’s head coach, and almost two years into his tenure.

Vincent Kompany, Joleon Lescott and Stefan de Vrij were among the centre-backs Eriksen was tasked with manipulating. Ryan Babel and Tobias Sana were the wingers he would create space for and link up with.

A BBC match report taken from the 3-1 defeat of City in Amsterdam refers to Eriksen playing in a side that “pass and move with pace and flair, forming combinations all over the pitch and attacking fluidly from wide or through the middle”. It is a description of a way of playing that has been beyond United for much of 2022.

One can understand why Ten Hag asked Eriksen to play as he did a decade ago.

The 30-year-old is a boon to this United squad and is likely to prove an important midfield multi-tool over time, but United look in dire need of specialist instruments at the moment. Ten Hag’s admission that he was wrong-footed by Brighton’s approach to the game was also telling.

Post-match, he said of Potter’s side: “They played long ball, so it’s not about pressing, it’s about winning the second ball; and then, in such occasions, we did not always do what we laid out before the game, and we definitely have to learn from those lessons.”

“I didn’t expect that this team (Brighton) would play long routines, and I think it was a big difference. Our opponent have their routines, they are a long time together with a certain philosophy and a certain plan, co-operation between coach and team, you could see. And sometimes, we are not.”

Ten Hag has enjoyed success using Dusan Tadic as a false nine for Ajax, most memorably in the 2018-19 Champions League run that came within seconds of reaching the final, but those games saw the rest of his team press and counter-press in central areas with a vigour missing from this United side.

In wide areas, Dalot and Luke Shaw lack the intensity of Noussair Mazraoui and Nicolas Tagliafico in overlapping and unlapping runs. Rashford and Sancho also failed to attack the spaces Eriksen vacated with the potency of Hakim Ziyech and David Neres.

If Eriksen was playing as a false nine in a team as good as Ajax 2018-19, it could work as a very good way to recycle the ball at the price of some penetration in central areas.

Playing in a team as strange as Manchester United 2022, he is a cherry sitting on the table while Ten Hag ponders how to use misshapen eggs and some strange-smelling milk to create a cake.